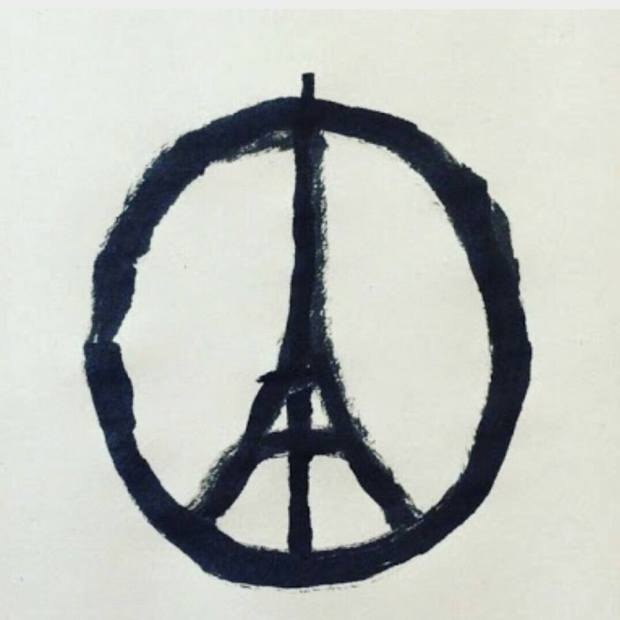 Here we are again, friends. It’s 10 pm and I have gone from trying to wade through the crashing waves of thought that plague my mind, to trying to sleep, to trying to read more about the tragedy in Paris, to trying distract myself with music and movies to sitting here in the dark, trying to understand how we got here. Again.

Yesterday, I read through pages and pages of media coverage of the bombings that killed 43 people in a predominantly Shia part of Beirut (read more here). I have been fatigued by the constant acts of violence around the world  that I tried to let it wash over me as quickly and unassumingly as possible. I didn’t want to take it in and carry what it meant.

But this morning, I woke to news of the attacks in France. I spent all morning watching the rolling coverage. First, 13 people were reported dead. Then 35. Then 40. Then suddenly it jumped to 120 as news broke of the assailants throwing bombs at the crowd in the Bataclan theatre. It was two locations, then three, then seven, then maybe four, then definitely seven.

I found myself glued to my screen, jumping between the BBC live stream and then that of France 24.

I was receiving messages from my friends: from the political experts asking me what I thought of France’s immigration policy and whether I thought it was home-grown terrorists, what I thought of the government’s response to the unfolding events; friends who were scared about what this meant for Muslims and whether it would be safe to go anywhere today; and friends who knew I would be obsessing over every little detail of what was happening. Those friends told me to peel myself away, to switch off from the commentary.

Of course, they knew and now you know that I couldn’t. I never can. I couldn’t help but think of the attacks on Charlie Hebdo and the heinous loss of life. I just can’t believe it is happening again.

I was scared for my aunt and cousins who live just outside of Paris. I was worried about them being at the stadium or in one of the restaurants. I worried about whether the attacks were going to continue or whether there would be retaliation from right-wing extremists. I texted my mother and asked her to call my aunt to make sure she was okay because I was too nervous to do it myself. Eventually I called her myself.

She was scared, like every other Parisian, about what the attackers were doing, hoping that they would be caught.

She was scared, like every other Muslim, about what the racists would plan in retaliation and whether these horrific events would continue to bleed into the coming days.

I’m not quite sure why I’m telling you about how I watched the events unfold today. I suppose it’s the only way I know how to write this post right now.

I’m tired. I’m so tired of seeing these things happening. I’m tired of watching innocent lives being taken by pathetic, misguided fools. Those aren’t even the right words to describe these attackers.

How do you even begin to characterise someone so disgusting. Misinformed and misguided seem far to benign. These are people who are so damaged that they honestly seem to think that killing innocent people, who are out enjoying their Friday night, is justified.

I can’t even begin to understand how it is that someone can genuinely think the way that these people do. I don’t understand how someone could be so brainwashed as to think that it’s okay to take another life.

I’m tired of having to think about these things and wonder what it is that I can do to make them better. I’m sick of having to wonder how it is that youth can be radicalised in a way that results in them becoming murderers.

I’m tired of having to explain why it is I’m Muslim and how disconnected from Islam these assailants are. I’m tired of having to prove that I don’t believe what it is that these people believe and that I have loyalty to my country and my people. I’m tired of crying my heart out for the sake of those who lost their lives and their family and friends that somehow need to deal with all that has happened.

I’m tired of being scared about what this means  – whether other extremists are going to be inspired and commit similar crimes and whether this means that Western nations will continue to bomb the Middle East and whether my Muslim friends and family will be safe from misguided retaliation.

I’m tired of having to watch the media coverage closely to try and piece together the facts and find some sort of pattern to make logical sense of what is happening. I’m tired of having to listen to commentators who tell people that the Islamic terrorists are using Islamic texts to justify their actions and that the Muslims don’t do enough or don’t care enough to make things better. I’m sick of listening to solutions to these acts of violence that involve the perpetration of even greater acts of violence.

I’m tired of feeling personally responsible and personally at fault and personally impacted by these attacks. Every act of violence perpetrated in the name of Islam weighs me down like a ball and chain. It creates another example that I have to explain to those who ask me why Muslims do these things.

How do I explain the inexplicable? How do I make sense of things that the world’s experts can’t seem to figure out?

I’m tired. All I want is the soothing comfort of sleep and the wave of clarity that comes with my dreams. I want to hold on to that moment when I first wake up and feel privileged to be alive; to exist in that space just before the reality of the world floods my mind once more.

I want solutions. I want tangible solutions to extremism. I want to know the signs that we miss and the ways in which society is failing these people that results in them hurting us. Hurting all  of us.

Hold your loved ones close today and be kind and merciful. We all need it.

6 thoughts on “Pray for Paris, Pray for Beirut, Pray for Humanity”