I like to think I’m a relatively smart girl. However, I have believed some pretty ridiculous things in my younger (ish) years. It’s embarrassing.

Here is a list of what I consider to be the five dumbest things I’ve believed. Sadly, I only stopped believing some of these things pretty recently.

Why did the bunny cross the road?

We’ll start with the strangest. I have no idea why I believed this because I can’t actually remember anyone telling me this, it’s all self-propagating.

Yes…Bunny tunnels. I used to think that the government had these massive tunnels made to cut straight through major roads, providing rabbits with safe passage across the road and preventing cars from having to turn them into rabbit kibbeh nayyeh. I honest to God thought they were animal crossings. Not for big animals like kangaroos, obviously, but wombats… bunnies. Stuff.

I don’t even know where this started or what made it stop. I don’t know… I don’t… know.

2. Venous blood is not red.

Arteries and veins – how do they work?

Now look, this one is pretty common. But I studied medical science and can’t actually remember when I stopped believing this, so it’s concerning. It’s also a little bit worse because I had actually spent time thinking about various aspects of this stupidity.

I truly believed that blood was red because of the oxygen it carried, and when oxygen was deposited where it needed to go, blood turned blue. Thus spawned my belief that venous blood was actually blue.

I was also convinced that the reason why all the blood we bleed is red is because the blood is exposed to oxygen from the air that instantaneously diffuses into the blood cells. Bruises were purple and blue because obviously some of the blood was fresh, oxygenated blood, some of it was de-oxygenated blood that had pooled and parts of the bruise contained a mix of blue and red blood so it went purple. Obviously.

I was in grade four at the time. I remember sitting at a table of mostly boys. In the group of 6, two of us were Muslim. The boys were discussing where babies come from. One piped up that it was because parents had sex, which lead to the  creation of babies.

I was horrified at how wrong this boy was. Sex??? Sex was something bad people on the TV did! There was no way that babies came from sex, because Muslim people didn’t ever have sex because Muslim’s were good, innocent people.

I, of course, let everyone know this.

‘Then where do babies come from??’ whispered the lead sexpert of our table group, being careful not to let our teacher know what we were talking about.

Bob had no idea either but agreed with me. Muslim’s never had sex.

I went home that afternoon and asked my mum where babies came from. She kindly informed me that when a man and woman got married, the woman would have a zipper in her thigh that would release babies when they were ready. It would disappear once the baby came and reappear when necessary until God was finished sending you babies.

I had my answer. I was convinced.

It wasn’t too long after that that we had a proper puberty and sex talk at school – diagrams and creepy animated videos and all. I think it started a history of trust issues between my mum and I.

As an aside, this one’s weird because I had been receiving ‘stranger danger’ education since kindergarten and knew that no one was allowed to touch me inappropriately. I just never connected the dots. 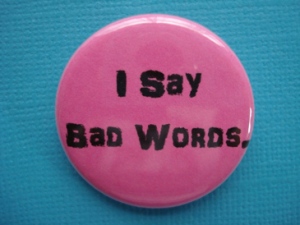 I was a freakin’ good kid. I had never sworn at anything in my entire life. I didn’t know how to. Up until I was about 18 or so, even reading a cuss word was difficult. I’d just skip it.

When I was in grade 2 or so, I happened to be going about my merry way at lunch time when I suddenly spotted some graffiti. Someone had written ‘FUCK’ on one of the silver seats in the playground. Horrified, I raced to the teacher on playground duty to report this heinous act. She told me I should just sit on it for the rest of lunch so that no one else would see it.

No one should tell little Amne to do anything.

I did it. Not only did I do it; a group of grade 6 kids had come to this slightly more secluded area of the playground to play spin the bottle. They demanded that I go away, but my absolute meekness was trumped by how adamant I was to obey the rules and keep this swear word from being seen.

The kids shrugged me off and played their game right beside me. When a pair was about to kiss, I screamed, shut my eyes tightly and blocked my ears. It was the lesser of two evils and I took one for the sake of humanity.

I’m a bit more liberal with my use of words now. 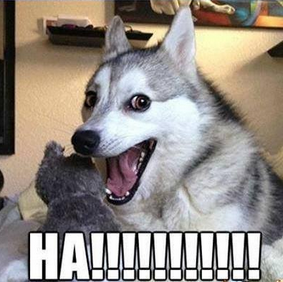 To be more correct, I didn’t even know what a joke was until grade 3 or so. I remember it was early in the morning and the teacher was marking the roll. To make it more fun, she said that each one of us was to tell a joke when she called out our names. I was confused. I didn’t know what a joke was or how to tell one, but it was okay. There was one person before me on the roll and I’d just copy what he did.

I don’t remember what his joke was, but it was a ‘knock knock’ one. Confused at why he didn’t say his name when the teacher asked ‘who’s there?’ I thought I’d do it right.

My poor, poor teacher gave me a fake, confused laugh. I remember the brutal microsecond before she laughed and can only imagine what she was thinking about this new little weirdo in her class.

During my adolescence, being the little weirdo gave me a great sense of humour though, because I had nothing else. SO SUCK ON THAT, MISS WHATEVER-YOUR-NAME-WAS.

So there we have it.

I’m sure there are plenty of other ridiculous things swimming around inside my brain. I just have to think a little bit harder.

But please, go ahead and let me know what crazy, asinine crap you’ve believed. Help me feel better. Please.

*Bob was not his real name.

6 thoughts on “Weird Things I Thought Were True That Obviously Aren’t.”