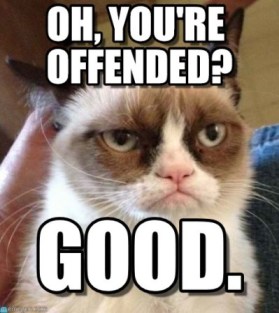 I’m glad I have your attention.

Look. I’m extremely cynical sometimes. I’m not a glass half full or half empty kind of girl. I’m a ‘WHO PUT THIS HALF GLASS OF WATER HERE?’ kind of girl.

So when I pay attention to society, I tend to get annoyed. I’m surrounded by people offended that Grant Hackett may/may not be addicted to Stilnox and may/may not be starting a new fashion trend that involves a white singlet being used as a skirt. People offended by Miley Cyrus’ vulva and Warnie’s selfies.

Yet somehow, in a modern world, in a country of opulence that boasts strong human rights convictions, we’re not offended by the fact that there are ‘boats’ that seek asylum through our shores that get sent away. We’re not offended by the fact that we sit comfortably and munch on our dinners while thousands of people who have fled unspeakable violence are imprisoned in detention centres. We’re not offended that the ‘boundless plains to share’, that our very national anthem boasts of, have had a wall put up around them to keep the world’s most vulnerable souls out.

‘STOP THE BOATS’ they proclaim, as if these boats are filled with cannibal rats and are heading to our shores.

Let’s get something straight. We’re not stopping boats. We’re stopping helpless people from legally seeking asylum in our lands, as per the United Nations Refugees Convention.

They’re not people who are attempting to come here on a cosy holiday. They haven’t arrived via cruise ship. They’re not people with no other care in the world. They are asylum seekers.They’re people who have homelands that have been ravaged by war and torn apart by cruel factions. They’re burdened with famine and losses that we could never truly comprehend.

You think that’s not your problem? Think again. Your tax dollars have helped fund a military that has invaded many of these people’s countries.  Your money has helped fund the rise of dictatorships and the disintegration of the very fibres that held these nations together. I’m not saying that a Western military invasion is the only reason why these countries are uninhabitable for some people. However, the war on terror and increased influx of asylum seekers are not two separate events. They’re linked. They are a disease and a symptom. Smoke and fire.

If our military is there to help ‘free’ citizens of the evils of their terrorist groups/leaders/allies/whatever-is-convenient, we should be willing to clean up the fallout and lend a helping hand.

‘Those illegals are queue jumpers!’ they add, as if being that desperate for a home involves standing patiently in line to be processed.

Could you imagine? Could you imagine if Australia suddenly fell into war? If every person you knew had either been raped or had a family member who had been raped by a rival faction? If you couldn’t even ensure your family would be sheltered tonight, let alone every night this week? Could you imagine an Australia where propaganda filled the airwaves and the newspapers? Where you were under threat of being taken and tortured because of your gender/race/religion/skin colour/family connections/nationality? Could you imagine if your street was suddenly raided, your neighbour’s son kidnapped and a majority of houses torched?

Would you truly sit there and fill in papers to seek asylum in another country? Would you truly not jump on the first boat you were given the chance of getting on… even if you had no idea where you would end up or how you would get there?  Would you sit and wait to be unfairly prosecuted by the now corrupt religious courts that are likely to sentence you to death or would you get the hell out of there by any means?

This is why I loved the SBS program Go Back To Where You Came From, a show that followed divided Aussies as they made the reverse trip of asylum seekers to their war-torn lands. Some opinions changed (thankfully). Others… well. Some people are just giant bigots and there’s no fixing that.

You want to talk about queue jumpers? How about the British and New Zealand ‘overstayers’? STOP THE PLANE PEOPLE. There’s about  60,000 of them. Have a look at the interactive map in this article to compare it to the number of asylum seekers who are locked up. You may be surprised.

Asylum seekers are not queue jumpers. THERE. IS. NO. QUEUE. There’s life and death, and we’re making them re-live their torment over and over and over again. It’s disgusting.

I have one response to that. SHUT THE HELL UP.

What is essentially said in this statement is that people arriving to Australia via boat aren’t always refugees. Sometimes, they’re people who are just looking for a better future, enticed by the idea of making more money.

Why is that so terrible? Why is it so awful if people in war-torn lands with no means to care for their families are wanting to go to a country where they are willing to do any job to look after their families? You think it’s more economically viable for Australia to lock people up in detention centres than it is to have people working and funnelling tax dollars into the country?

Oh right, let me guess. Now you’re going to tell me that these people don’t meet the definition of ‘asylum seeker’. Right, so you don’t think not being able to feed your family properly is a good enough reason for asylum? Not having a future at all is alright? Let them eat cake and all that jazz, right?

Mate, use your inside voice. Not all refugees come from Islamic countries. Those who do are most likely fleeing the ‘Islamist-Shariah-Terrorist’ laws anyway and will probably help you fight it. Plus, haven’t you realised yet? Shariah law isn’t a threat. Extremists can’t even make it happen in their own countries. What makes you think it would ever come over here?

Alright, buddy. Take it easy. There aren’t millions of them. They’re not an infestation. Asylum seekers can quite readily contribute to Australian society in a number of ways. More people = the need for more services = more jobs created = happy. I’m not saying all asylum seekers are created equal, but you can’t just lock them all up because there are a couple of bad apples in the group. It doesn’t make any sense.

You’re worried about your Centrelink benefits? It’s okay. If we bring back our troops we’ll have a lot more money and we get the added bonus of not having destroyed the lives of our own youth. Win-win.

‘THEY STOPPED IN INDONESIA. WHY DON’T THE WEIRD MUSLIMS… I MEAN…. TERROR… I MEAN… BOAT PEOPLE STAY THERE?’

So Indonesia wasn’t good enough for Schapelle Corby, a convicted drug smuggler, but you think that asylum seekers who have been through hell are going to suitably be able to establish a life in Indonesia? You’re happy to pass your responsibility to Indonesia and be able to sleep at night with a clear conscience? Maybe you can.

Let’s make a deal. How about you live through half of what most asylum seekers have been through and then ask Indonesia for a cuddle? If you’re happy with the outcome, I’ll join your side.

I’m glad to see that people are upset over the death of Reza Berati, a young asylum seeker who died while under our ‘protection’. But we cannot just forget about him as more stories of Miranda Kerr’s pop-star dreams wash through the media. There are thousands of asylum seekers locked away, day after day and many more who need to be here.

So yeah. Be offended about the hell we’re putting asylum seekers through.

Note:  I was going to add photos to this post, but I just couldn’t bring myself to do it, as each is more heartbreaking than the next. If you’re interested, have a look at the UNHCR photo gallery.

10 thoughts on “I’M OFFENDED BY MILEY’S VULVA BUT NOT DROWNING ASYLUM SEEKERS.”