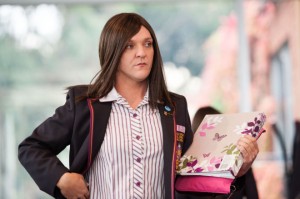 Ja’mie King – ‘She’s what the kids would call a slut.’

Women – in fact, even prepubescent girls – are becoming more and more sexualised in all public arenas. Seeing Miley Cyrus’s vulva and Kim Kardashian’s butt-cheeks is just part of another day. This ‘freedom’ that women now experience is really just an extra ball being added to an already long, heavy chain.

The overt sexualisation of women in the media has not resulted in our sexual freedom. A double standard still hangs around our sexuality and women who have had multiple sexual partners are still looked down upon. We’re expected to be.. modest sluts… slutty…modests….slumods. Moduts?

It’s easy for people throw about the term ‘slut’ – a label that aims to insult and objectify the female on the receiving end. With an increase in internet access, it’s becoming even easier to proclaim the sluttiness of anyone – the author of an article, the subject of a news story (whether celebrity or otherwise), a vlogger, a blogger, their daughters, their mothers or any other female relatives.

There’s a problem with this. A serious problem.

Slut-shaming is just not on. By all standards, calling a woman a slut does not come at cheap price. At best, it makes you look like a complete idiot and at worst, someone takes your stupid label seriously and demeans the subject of your insult.

What does Islam say about this?

Well, for a religion that is portrayed as one that suffocates women, Islam stands firmly against slut-shaming in all ways. It’s called ‘قذف المحصنات’ or insulting a woman’s chastity. I get it – that may sound bad. Who cares about a woman’s chastity? Blahblahflawedfeminismblahblah. Hang on a minute, let me explain.

Let’s be real. The world we live in isn’t fair. Yes, there’s an overwhelming stench of patriarchy lingering in the air. Islam recognised that labelling a woman as a slut is easily one of the fastest ways to ruin her life. This is still the case in many cultures today.

On chastity-bashing, the Quran says in Surat Al Nur, Ayah 4:

which can be translated to:  ‘And those who accuse chaste women and then do not produce four witnesses – lash them with eighty lashes and do not accept from them testimony ever after. And those are the defiantly disobedient.’

This Ayah came in defence of Aisha, the Prophet Muhammad’s wife who had been falsely accused of adultery during on of her trips with the Prophet. Although it came in her defence, the Ayah is applicable to every situation where a woman’s chastity is questioned.

Although Islam provides for harsh punishments to prevent cheating and other fornication beyond what is allowed, there is an extremely strict requirement before any punishments are dished out  – four witnesses must have seen the… fornication. Not just thought to have seen it. No, no. Actually have seen the male entering the female.

With the above Ayah, the Quran has deemed it completely unacceptable that a person claim that a woman is a slut, or really, anything along those lines. So heinous is this act, that the accuser is subjected to 80 lashings and the inability to act as a witness to any event, evermore.

Beyond this, gossiping about others is sinful. The Quran states in Surat Al Hujurat, Ayah 12:

That is: ‘O you who have believed, avoid much [negative] assumption. Indeed, some assumption is sin. And do not spy on or backbite each other. Would one of you like to eat the flesh of his brother when dead? You would detest it. And fear Allah; indeed, Allah is accepting of repentance and merciful.’

Islam works on the basis of good faith, that is, assume the best unless otherwise proven wrong. A good Muslim measures their words and treats their tongue as their greatest ally and also the greatest enemy.

4 thoughts on “Slut-shaming – It’s Just Not On”