Every now and then something silly happens in Australia and I wonder whether it’s better to talk about it or lay on the ground and wait for the stupid to subside. Sometimes, I’ll make jokes to highlight how ridiculous something is, other times I write about it.  This is going to be one of those times – no, no. I promise I won’t lay on the ground. Let’s talk about it. Let’s get all the key players out first. (P.S I once made a sarcastic video about how eating halal meat makes you Muslim. You can watch it here. It involves halal animals breeding with non halal ones.)

Kirralie Smith believes in freedom – for her beliefs only, obvs.

Halal Choices is the baby of Kirralie Smith who claims to ‘love the freedom we have’ in Australia. She has created a website that aims to list all the halal products being sold in Australia so that everyone can boycott these products. You guessed it – yes, I use this list of halal products as a starting point when doing my grocery shopping and I freaking love it. Unsure which cheese contains halal rennet? Check Halal Choices. Feel like some delicious lollies? Check halal choices.

Depending on the time of day that Kirralie does an interview or presentation, she can go from purely wanting companies with halal certifications to clearly label their products to wanting all Muslims to be a bit more patriotic and do away with their silly halal requirements.

Kirralie has been on her mission for a couple of years now. I first saw her on Today Tonight where she was calling on Halal certified companies to display their certifications so that people could make an informed choices about their foods. This is more than reasonable. Along the way she spiralled into some slightly bigoted rhetoric (but don’t call her a bigot. She doesn’t like it).

I want to highlight now that I would love to sit with Kirralie and have a civilised conversation about this – the invitation is open. Contact Me. 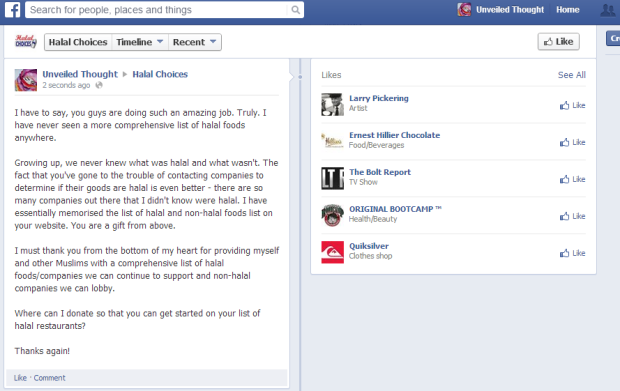 I once thanked Halal Choices for their contribution to the Muslim Community. 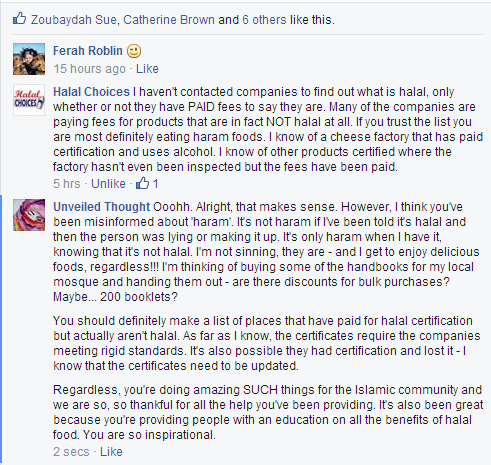 Restore Australia is an amalgamation of incoherent bigotry, racism and sometimes outright violence.  The group say they have two goals – firstly, they believe all Australians should be allowed to initiate a referendum and secondly, that all Australian voters should have a say in how the Constitution is written. We all know that 23 million people writing one legal document will result in a fantastic document – it’s like that group assignment you had to do, but instead of four or five fonts and thought processes, you get a couple million. Genius!

It’s headed by Mike Holt, a self-proclaimed ‘patriot’ and ‘infidel boss’. Restore Australia wants to help stop the ‘Islamization of Australia’ (you really want to look at their sister website Islam 4 Infidels).

Mike Holt (source). Sure, his followers get violent, but that’s the victim’s fault. He’s totes different to the leader of terrorist organisations, you guys.

He also has a problem with the lack of clear labelling on halal certified products but conveniently adds that even if there was better labelling, he and his crew would still be against it. Remember, you guys – freedom for all, except for everyone else but Kirralie and Mike.

Mike says sure, his followers are ‘very passionate’ and have made threats (to companies, people) but it’s the companies’ faults for bringing it upon themselves. Charming.

Impressively (and tragically) there is  a Facebook group called Boycott Halal in Australia with almost 40 thousand members. I’m not even going to go into this because it’s actually rather insane. They essentially refer people on to Halal Choices and have a bunch of letters that you can spam companies with that go on about how Jesus is the Lord and Saviour, thusly, don’t let the Muslims eat the foods we want to eat blah blah blah. I’m sure that’s exactly what Jesus preached. Whatever.

GREAT. Now that everyone is here, we can continue. Let’s clarify what ‘halal’ is and why these guys are so adamant about being bigots in order to prevent halalness from spreading.

Halal is actually just an Arabic word for permissible. You can use it in the context of relationships or jobs or ownership or foods. Like, when you’re out going for a walk, you’re being halal. When you give your brother a hug, that’s halal. When you brush you’re hair, you’re being pretty halal. These days, most reference to halal is a reference to halal foods. Everything is halal to eat except for a couple of things (which may vary depending on the Islamic sect you belong to). Non halal foods and drinks include:

So water? Halal. Honey? Halal. Most foods? Halal. Beer and bacon? Not halal.

In order for an animal to be consumed, it must be prepared using the halal method. This requires the animal to be treated well during its lifetime. When it’s time to say goodnight, the throat of the animal is slit with a quick motion, severing the carotid artery, jugular vein and windpipe in a single swipe. Once the animal is dead, its blood must be drained and then it’s ready to go.

Look. I know. It’s not pretty – but that’s not because it’s halal; it’s not pretty because you just can’t pretty up killing an animal for consumption. However, the problem here isn’t how the halal foods are produced. These people don’t care about the technicality around processing of animals for consumption.

Let me be clear – this is an attack against Islam, and more importantly, against Muslims and their freedom to just live.

The arguments being made to support this halal boycott are incredibly ridiculous – each more ludicrous than the other. Let’s have a look a them, together. Hold my hand.

Not all halal certified products are clearly labelled.

These groups tend to start their arguments with something along the lines of ‘Muslims can eat whatever they want but we should have the choice to not eat halal foods. Halal-certified foods need to be better labelled!’ I 100% agree. I had no idea that so many products were halal until Halal Choices popped up. I seriously use it all the time.

But even when products are clearly labelled, these groups go on their own little rampages and demand that the companies remove their certifications. In fact, Mike recommends that people purchase foods that are labelled as halal, open them up and take them back to demand a refund (something about not wanting to eat something blessed by Muslims) so that the store will have to give a refund and not be able to resell the product. It truly is charming. I don’t know why anyone would provide a refund for such stupidity.

Remember, freedom only for Kirralie and Mikey.

Halal certifications fund mosques and schools and Islamic community services. I don’t want to support that.

Well, that was easy.

Okay, alright. Let’s not laugh. These nice, true blue Aussies are worried about doing things that will fund the terrorisms. Fair call. Except for the part where they have been incapable of producing any evidence of halal certification money being used for anything inconspicuous. In fact, they don’t even have any evidence of evidence existing. Instead, reports suggest that the Australia Federal Police audit the halal certifiers and that these certifiers keep very specific records.

Halal foods that are already halal are being certified.

Yes, they are. Halal certification labels are popping up on honey, for example. Firstly, that’s a business decision. If they think being halal certified will help (particularly for exports), then let them certify. Secondly, manufacturing processes my unhalalify a food. Now, would I worry about that too much? Not even a little bit. If you tell me something is halal, and all evidence points to that fact, then I’m going to believe it. If something is already halal, I will accept that it is halal until proven otherwise. Some people don’t accept that system and need a clear indication of the halalness of a product. These people obviously create a large enough market that companies certify naturally halal products.

Muslims are the only religious people who require certifications. No one else does it.

Heard of Kosher? No? Here, have a read of the Kosher Australia website. My Jewish brothers and sisters have very similar dietary requirements. They also have their own certification schemes that ensure that foods claiming to be kosher are prepared as such.

Is this cow halal? Well, it may have a secret certification that we don’t know of.

We’re all being forced to pay more for our products to cover an Islamic tax. The Muslamics are taking over with their ray guns (find out more about the ray guns here)

The argument is that products are more expensive because companies pass on the cost of halal certification to the consumer. There hasn’t been evidence of this at all. In fact, when asked to produce evidence, Kirralie has changed the subject.

Let’s be sensible though – why would a company pay for a certification that causes a product to become uncompetitive by being more expensive than those sold by other companies? Maybe, just maybe (and I don’t have evidence, I’m just maybe-ing) there is enough of an increase in demand that the price of halal (or Kosher) products doesn’t need to increase.

We haven’t even looked at the value of the halal export market (it’s something like 2 trillion dollars, by the way), bringing more work for Australian companies exporting to South-East Asian and Middle Eastern Markets.

But y’know. What do we know?

Kirralie often says that it’s ridiculous that food manufacturers are fulfilling the needs of only 2.2% of the population. You see, there are only about 480,000 Muslims in Australia. Our anti-halal friends say that it’s ridiculous that companies even undertake certification for such a small market. They say there are plenty of halal foods out there that don’t need to be made halal for Muslims, and if they don’t like it, they can go to a Muslim-majority country.

On my count, there are about 48,000 likes on the Facebook pages of the aforementioned groups. Thusly, these geniuses want companies to pander to the drivel of 0.22% of the population. I’m no longer very good at math, but I’m pretty sure that 0.22% is a lot less than 2.22%. Just saying. So, you xenophobic bigots, if you don’t like the fact that Australia is an open and welcoming country that is capable of fulfilling many of the needs of the cultures that make us who we are, go somewhere else.

The list just goes on. These arguments are full of contradictions; full of hatred and bigotry. It’s time that these groups are put in their place.

What can you do?

Well, use the Halal Choices Product list. Write to companies with halal certified products and thank them for being accepting of the various faiths in this country and show them your support. Maybe it’ll counter the crazy the receive from these anti-halal groups.

In the meantime, I repeat my invitation to Kirralie – let’s hang out. I think you mean well but are severely misguided.

Halal love to you all.

39 thoughts on “Halal Choices – But Not For Muslims”