First picture taken in Bali; view from my room in Sanur

As you read in a previous post, I have just come back from a world-changing trip to Bali. Amazingly for me, each day seemed to naturally create its own theme.  Day 1 was spent travelling; but the theme for day two was awareness.

I felt like the day gave me a moment to pause for a moment and not only remember who I was, but where I was in my life; that is, I’m in a place where so many new things are growing around me. I’m in a place where opportunities are endless and risks are manageable – and what an exciting place that is. It was a good reminder to stop and smell the roses (or manure… you’ll see). It was also a reminder that sometimes, I enjoy things that I totally would never dream of enjoying – like mud-wrestling.

Before heading to Bali, I was acutely aware of how tired I was. Not a ‘I should get some sleep’ kind of tired, but a ‘where is the furthest planet I could go to’ kind of tired. You know? Although I’d had a great year, I was the sort of tired that seems to drain your energy and the energy of those around you.

Immediately before my trip, I was part of a workshop that discussed some of the biggest challenges facing our country over the next two decades. It reminded me that we lived in a huge, huge world, which is always comforting for me – it gives me a sense that no matter what happens, things will be okay. So my mind had turned into a sponge, ready to absorb what the world would offer me.

Arriving in Bali was a very surreal experience. Having not had the time to plan, I seemed to think that I had just been on a plane for 6 hours heading to somewhere down the road, apparently. The most telling sign was the intermingling of traditional Balinese wood-carvings with billboards for Polo and a Japanese-inspired McDonalds menu. Oh. And the psychotic driving made up of motorbikes and scooters darting in and out of cars.

We were taken to what would be our classroom and eating hall over the next couple of days – a beautiful bamboo structure, nestled amongst a few small fruit and vegetable gardens. The whiteboards that were used were actually car windshields that had been re purposed for the classroom. All our waste was separated diligently. It was just the most non-environmentally-threatening place I’d been in. 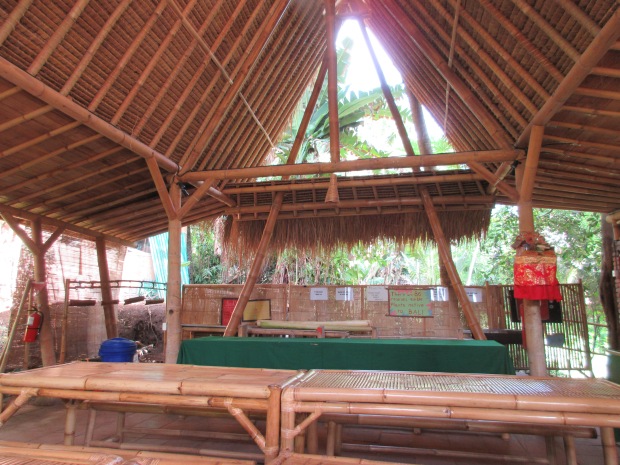 The classroom at Green Camp

After a team-building exercise that saw us blindfolded, tied to each other and trying to get a nail in a long-neck bottle (start of a good joke, right?), we received a lesson in Balinese culture and religion.

Bali is comprised of a predominately Hindu population, unlike the rest of Indonesia. It is a deeply spiritual place that is reflected in the offerings that we saw scattered throughout Bali. It is a moving spirituality that I really embraced – I couldn’t help but smile as I watched staff make offerings in the morning.

We learned about the tradition of making canang and gebogan; traditional offerings where each element is thoughtfully placed and representative of an element of their religious beliefs.

A description of the thoughtful placement of colour  (remember, that whiteboard is a car windshield).

The canang was a small box made of banana leaves where flowers were placed around the box, and pandan leaves were stacked in the centre:

The gebogan was a tower of food offerings, stuck to segment of sugar cane which formed the support underneath.

Gebogan (with a sneaky canang on the top).

After learning about this art and making some canang ourselves, we took our little creations to the temple. Of course, my mind wandered to whether what I was doing would be considered heinously un-Islamic. Instead, I found myself acute aware of how different people express their spirituality, and that learning about and participating in these rituals wasn’t an afront to the God that I worshipped, it was a nod to spiritual devotion in all forms – and I kinda loved that.

In the afternoon, we had a little lesson in industrial v organic farming before being sent on a plant hunt, guided by some tricky clues. The great thing was that I could name all the plants on the list and could mostly point them out – Banana trees, ginkgo, tumeric, chilli plants – but I could not for the life of me figure out what a cinnamon tree looked like. In fact, no one in our group could. Much to our surprise, it happened to be tree that we could all see from our little classroom all day.

After that, we made our own compost. It was… gross. 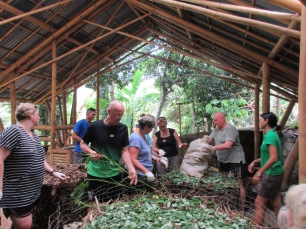 We were then given the opportunity to plant some little seedlings, with the only catch being that we had to do it in silence and wish our little seedling well. After that, we took a minute of silence and were asked to look around and take notice of the noises we could hear. Everything suddenly became so much clearer and crisper, almost as though the volume was turned up to the world around me. I was suddenly aware of how I am always so caught up in the sound of my own thoughts that I had forgotten to just look up and take in deep breaths.

The gang with our little seedlings. Go on, you little beauties. Grow away!

And then the part you’ve been waiting for. Mud-wrestling.

Before I got to Bali, I was convinced that I would not be taking part in the Balinese mud-wrestling (or Mepantigan) because ew and no. I even justified by decision in my head by telling myself that it’s great that we challenge ourselves, but even greater when we all know our own limitations and sometimes that’s just how it is.

Before being asked to actually get into the mud, our excellent mepantigan guides hyped us up – first with some stretches, then with some warrior moves, then by y’know. Wrestling each other.

As the mid-afternoon rain started to fall on us, we all just got into it. We had all been nice to each other until that point, but suddenly we were sharing an experience and being silly – for no reason other than enjoying ourselves. We learned a couple of traditional wrestling moves and calls, taking pleasure in screaming at each other and pulling funny faces. The kids from the troupe took pleasure in giggling around us, encourage a little happy dance every time we needed to celebrate. We even practiced shoving each other and flipping the wrestlers over. It was great.

At this point, we were all totally drenched with rain. I was tired; exhausted, in fact. This seemed to make the logical part of my mind go to sleep. This meant there was only one thing left to do.

And it was glorious.

We repeated our gangsta wrestling move and embraced the disgustingly wonderful and cooling mud. I loved watching everyone have a wonderful time and just laugh. Doing it made the whole experience incredible.  It felt like we were bonding in a way that can’t quiet be described – how do you put that sort of feeling into words?

For me, the most important thing I learned during the day Key was to remember to be more aware; whether that’s awareness of my own fears, the things that can’t be controlled, or the sound of water trickling in a nearby stream. 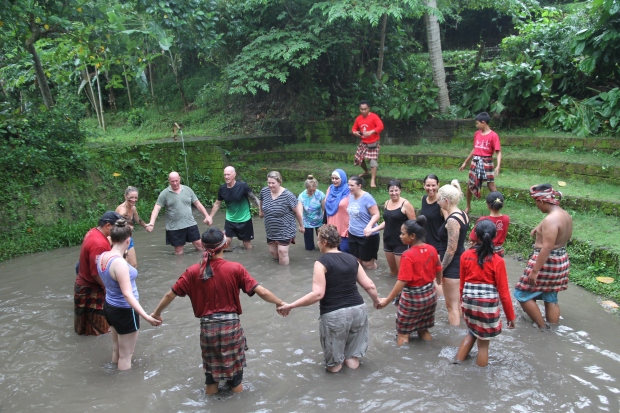