Before airing, Here Come the Habibis was bashed over and over for being ‘racist’ (you can see the trailer here). A petition was created, calling on Channel 9 to pull the show because it would perpetuate stereotypes and create a divide in the community. The creators, Rob Shehadie and Tahir Bilgic, insisted that people had misinterpreted what the show would be about.

I decided to reserve judgement until seeing it for myself. Well, tonight, the first episode aired on Channel 9 and wow. Was that a ride that was!

Let’s get the characters out of the way. The Habibs are a ‘typical’ Lebanese family. The father builds carports, the mother feeds the neighbours, the daughter takes selfies constantly and the brothers are… well. Bros. The family is loud, inappropriate and oblivious. The neighbours, the O’Brians or O’Malleys or something are a ‘typical’ not-Lebanese family who are terrified of the potential for their neighbours to be criminals and equally terrified of offending them. The family is loud, inappropriate and oblivious.

I know I know, but hold on. It’s not horrible.

The show opens with the Habibs moving into an affluent suburb. Of course, they cause a bit of a ruckus as they settle into their new castle. The neighbours pretty much decide that they’re criminal thugs and are unhappy – blah blah blah who cares about the storyline here- it’s mostly irrelevant. This is a comedy and we’re supposed to be focused on the shenanigans.

It didn’t take me long to make up my opinion.

Within the first few minutes, there were Lebanese people being obliviously loud. There were white people trying to say hello and somehow taking the conversation to ramblings about racism, the ‘you’re not all criminals’ talk and of course, reference to the infamous Cronulla riots. The Habib husband and O’Patrick wife butt heads in the most stereotypically neighbourly way. The Habib wife and O’Leary husband try to keep the peace.

Over the next 45 minutes or so, I found myself relating to the Habibs and seeing the Lebanese-Australians that I know in them. A father randomly breaking out in song and dance about lemons. An embarrassing mother trying to feed everyone baklava (my work colleagues can tell you that this is true of me!). A daughter being protected by her hectic-but-not-actually-tough brothers while she takes selfies. The cousin named ‘Jahish’ or ‘Donkey’, a standard Lebanese insult. The Lebanese-style BBQ. The screaming in Arabic. The accent! Oh goodness, the accent just warmed my heart.

I found myself cringing at the inappropriateness of the neighbours and remembering all the strange interactions I have with new people – the misplaced support and unprompted assertion that the coloured people aren’t all criminals. The strange questions that imply suspicion.

Sure, the characters were all exaggerated (sorta… kinda…). The stereotypes were rampant. But that’s exactly what makes this show so timely and necessary. The stereotypes are ridiculous. The difference between the families is ridiculous. By making these stereotypes so obvious; everyone benefits. Those who think in stereotypes can see how ridiculous it is to reduce a person to a stereotype, and the subjects can have a chuckle about some pretty true-to-life practices.

The show does a few more things that I really like – whether that was conscious or not, I don’t know. But it doesn’t matter.

Firstly, the arguments the neighbours have are not about idealogical differences or those brought about culture. There’s no ‘why do you support Sharia’ or ‘why do you eat halal?’ (mind you, the Habibs aren’t Muslim). They’re arguing about what to do with a bloody fence. How Australian!

Secondly, the families are both generally well-meaning. Sure, Mr Habib and Mrs O’Connor are jerks who are bickering about stupid things, but their spouses are trying to make peace offerings and ease the tension. Every family has a slightly deranged member. We all have to learn to deal with it and try and make it better.

Most importantly, the kids are getting along. Lebanese boy has a crush on the Australian girl and his siblings like her and they’re all driving around causing trouble and being young and stupid together. There’s no mention of any cultural differences – they don’t give a shit.

Now, that last point is where people have problems. The Habibs are a ‘Lebanese family’ and the O’Callaghans are an ‘Australian family’. This difference has concerned people who think that the show will continue to perpetuate the idea that you can only be Australian if you’re Caucasian and, even if you’re born here, you are Lebanese first if your parents are Lebanese.

After a car in Sydney’s Bass Hill was vandalised with vile comments about Lebanese and Muslim people (read more here), this discussion is pretty timely. 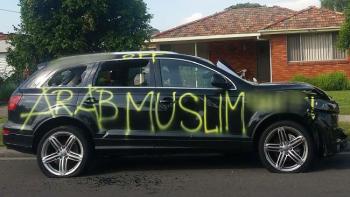 Look, there are horribly racist people out there. Those people don’t need a TV show to spin disgustingly racist hate-speech. They don’t need a TV show to support their views. Those views are long-held and so deeply entrenched. I’m sure we can agree that anyone using an exaggerated comedy to support their racist opinion of others is an idiot, so who cares if that happens?

Here Come the Habibs is taking some relatively complex issues and turning them into a joke. Does that mean that the show will derail some really important conversations? I certainly hope not. Think about it – what does it say about the state of affairs if a random comedy on channel 9 is enough to halt any meaningful conversation? If that’s the case we have much bigger problems than a TV show.

In an age where minorities are trying to own the way that they are portrayed, Here Come the Habibs is providing that. I’m not going to say that it’s empowering. But it’s not disempowering either. It’s a stupid Australian comedy with some pretty rubbish acting that’s taking the piss out of everyone. Maybe it’ll remind people how similar we all are. It will certainly remind people that Lebanese people love kebabs and baklava. Are we really going to be offended by that?

Let it go, habib. It’s going to be fine. Let’s see where this show goes.

One thought on “Here Come the Habibs: Was it Racist?”